William Dyrke de la Coeur Grifon was born on Sept. 30, 1366 to his mother, Margarida de Beaumont and his father, Dyrke de la Coeur Grifon, at his mother’s dower castle, Bien Venue. At the time of his birth, his parents had been married over 10 years and his mother had nearly despaired of bearing an heir. The young miracle had only one playmate when he was very young, his mother’s 14 year old maid, Helaine d’Aelfstun, and the old tower and upper bailey of the double-ringed, moated castle was his playground.

As William grew, Dyrke employed tutors for his son, who applied himself to his schoolwork more out of duty to his father than out of real interest. His reward was his father’s company. William often accompanied Dyrke south to observe the rising walls of the palace his father was building and would name Grifon’s Nest. If William was lucky, he could play at swords with the sons of his father’s reeve, or manager, old Gandulf. Once, at play, young Geoff Gandulf broke a window at the site, and when William saw his father’s rage, he knew Geoff would have a whipping for it, so he told his father he broke it. He got off with a lecture, and earned a friend for life.

As a young teen, his academic tutoring continued, but a sword master and tutors for the horse and warfare were added. These subjects he enjoyed. His body, still growing and in good health, thrived on the physical exercise. He discovered he had a talent for warfare and battle planning.

When he was 13, he fell from a horse as he tilted at the quintain, broke his arm and developed a fever. His mother bundled him up and took him into the woods to a strange old man named Nichol, who set his bone and gave his mother the herbs needed to mend his arm and strengthen his febrile condition. Years later and in a foul mood, William would come upon Nichol in the woods and would have to be reminded of the man’s service to himself and his mother.

For his 15th birthday, his father gave him a stallion, a big-boned destrier with whom William 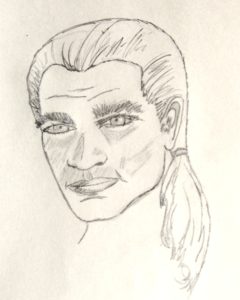 could refine his equestrian studies. He learned quickly that the stallion, whom he named Hrothgar, was headstrong, and that while William could be even more headstrong, both his stubbornness and physical strength must be tempered with finesse and kindness to bring about the kind of partnership he wanted and needed with Hrothgar. And so he followed his father’s master of the horse about, soaking in the man’s knowledge and applying it to his stallion’s training, so that when he spent a year under his liege lord’s roof to gain a sense of the political strata he’d travel in, Hrothgar went with him and was the envy of all the other squires.

Just shy of his 17th birthday, William went to OxfordUniversity to complete his education. There he met Andrew MacKay, who would become his lifelong friend, despite being a Scot and later a spy. Here he also met and grew familiar with his peers, including Ancel Catington, a close friend despite their opposing political views and family ties.

He accompanied his father to family estates in Normandy and in Bretagne, all in secret, as it was illegal at the time for an English noble to own property in Normandy and much of France. He had a fling or two while at Oxford, but it wasn’t until he spent time in Paris immersed in his father’s businesses that William fell in love and experienced the kind of real heartbreak that left him emotionally scarred. He found himself involved in duels for his honor, and fought his way out of more than one ambush that should have cost him his life. In a peculiar twist of fate, one of his attackers died in his arms as William listened to his tale of a hard life and his regret at leaving a loving wife and three children. Angry with the thief, yet filled with compassion, William buried the man and anonymously sent his family enough money to buy a hectare of land, a cow, two breeding pigs and some chickens.

Conservative by nature, stubbornly iconoclastic, jealous of his responsibilities and wary of political entanglements as his father had taught him to be, his time in Normandy and France expanded his knowledge of the world for better and worse.

When he returned to Norburnshire at his father’s death, William was a changed man.